Compared to most shorthair breeds, British Shorthairs are relatively calm cats when they mature. They are easygoing in nature and talk infrequently. Very affectionate, they become quite attached to the people they own. British Shorthairs are easily trained and very adaptable. They seem to get along well with all human members of the household, regardless of age, but are usually not fond of being carried. Pets of all kinds have been kept with British Shorthairs, including dogs of all sizes, rabbits, and birds. British Shorthairs are not known for being acrobats and can tend to be clumsy at times. No breed specific, health related problems plague the British Shorthair.

These are sturdy, dense-coated, purring, teddy bear cats with large round eyes. Another thing that draws people to the British Shorthair is their size. Although they are not huge like the Maine Coon, they are a medium to large cat. They are a slow maturing breed and do not reach their full size until three years of age. Mature males average nine to seventeen pounds, and mature females average seven to twelve pounds. Although most people think of them as being blue cats, they come in a number of colors and patterns. Not every blue cat is a British Shorthair. It is still considered one of the minority breeds in CFA.

Probably the oldest English breed of cat, the British Shorthair can trace its ancestry back to the domestic cats of Rome. This breed was first prized for its physical strength and hunting ability. Today, the most they usually hunt is for their own food bowls. British Shorthairs may have started out as street cats in the United Kingdom, but with plenty of hard work from breeders all over the world, the British Shorthair has become a force to be reckoned with on the CFA show bench, having been recognized as a breed in May 1980. They are now beautiful, much-loved cats internationally. 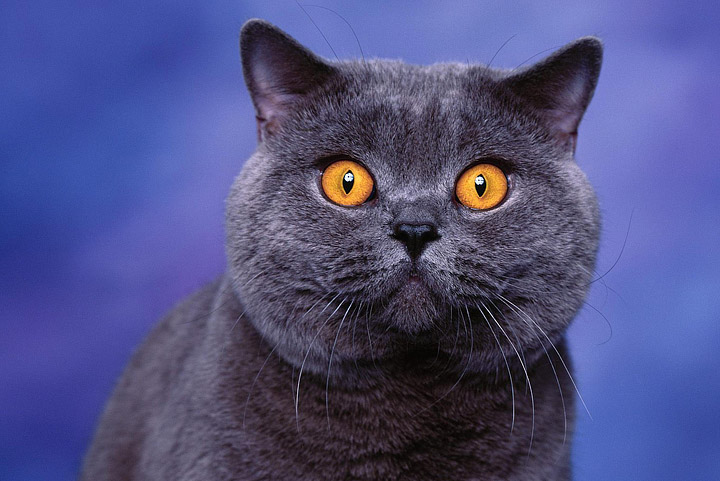 As mentioned previously, British Shorthairs have no specific breed-related diseases. When choosing a British Shorthair for your family, pricing usually depends on type, applicable markings, and parentage. Achievements which can be found in the pedigree include CFA titles such as GC (Grand Champion), GP (Grand Premier), NW (National Winner), BW (Breed Winner), and RW (Regional Winner). There is also the coveted award of DM (Distinguished Merit), which means that a female has produced five CFA Grand Champions/Premiers, and a male has produces fifteen CFA Grand Champions/Premiers. Usually breeders make kittens available between twelve and sixteen weeks of age. The experts seem to agree that kittens first start bonding with humans around the age of twelve weeks. After twelve weeks, kittens have had their basic inoculations, have been weaned, and have had the time to become well-adjusted. Most breeders require that they remain safely indoors and that they be spayed/neutered. Due to the breeders’ diligence in placing cats, rarely does a British Shorthair need to be rescued from a shelter. CFA and most breeders disapprove of declawing and tendonectomy surgery. With proper care, these cats will live a long, healthy, and joyful life and bring happiness to their family.