We all know that Popeye made himself super strong by eating spinach, but you may be surprised to learn that he may also have been helping to protect himself against inflammatory problems, oxidative stress-related problems, cardiovascular problems, bone problems, and cancers at the same time.

Even though virtually all vegetables contain a wide variety of phytonutrients—including flavonoids and carotenoids—spinach can claim a special place among vegetables in terms of its phytonutrient content. Researchers have identified more than a dozen different flavonoid compounds in spinach that function as anti-inflammatory and anti-cancer agents. (Some of these substances fall into a technical category of flavonoids known as methylenedioxyflavonol glucuronides.) The anticancer properties of these flavonoids have been sufficiently impressive to prompt researchers to create specialized spinach extracts that could be used in controlled laboratory studies.

These spinach extracts have been shown to slow down cell division in human stomach cancer cells (gastric adenocarcinomas), and in studies on laboratory animals, to reduce skin cancers (skin papillomas). A study on adult women living in New England in the late 1980s also showed intake of spinach to be inversely related to incidence of breast cancer.

Excessive inflammation, of course, typically emerges as a risk factor for increased cancer risk. (That’s why many anti-inflammatory nutrients can also be shown to have anti-cancer properties.) But even when unrelated to cancer, excessive inflammation has been shown to be less likely following consumption of spinach. Particularly in the digestive tract, reduced inflammation has been associated not only with the flavonoids found in spinach, but also with its carotenoids. Neoxanthin and violaxanthin are two anti-inflammatory epoxyxanthophylls that are found in plentiful amounts in the leaves of spinach. While these unique carotenoids may not be as readily absorbed as carotenoids like beta-carotene or lutein, they still play an important role in regulation of inflammation and are present in unusual amounts in spinach. Most of the flavonoid and carotenoid nutrients found in spinach that provide anti-inflammatory benefits provide antioxidant benefits as well. Given the fact that spinach is an excellent source of other antioxidant nutrients — including vitamin C, vitamin E, vitamin A (in the form of carotenoids), and manganese —as well as a very good source of the antioxidant zinc and a good source of the antioxidant selenium—it’s no wonder that spinach helps lower risk of numerous health problems related to oxidative stress. Our blood vessels, for example, are especially susceptible to damage from oxidative stress, and intake of spinach has been associated with decreased risk of several blood vessel-related problems, including atherosclerosis and high blood pressure. (Interestingly, the blood pressure benefits of spinach may be related not only to its antioxidants, but also to some of its special peptides. Peptides are small pieces of protein, and researchers have discovered several peptides in spinach that can help lower blood pressure by inhibiting an enzyme called angiotensin I-converting enzyme.)

Two of the carotenoids that are especially plentiful in spinach — lutein and zeaxanthin — are primary antioxidants in several regions of the eye, including the retina and the macula. Although we haven’t seen specific studies on spinach intake and prevention of eye-related problems like macular degeneration, we have seen studies showing that human blood levels of lutein can be increased by consumption of spinach in everyday amounts. We’ve also seen at least one group of researchers suggesting that spinach has a likely role to play in prevention of eye problems, including age-related macular degeneration.

Helping You Bone Up

The wealth of vitamin K provided by spinach is important for maintaining bone health. Vitamin K1 helps prevent excessive activation of osteoclasts, the cells that break down bone. Additionally, friendly bacteria in our intestines convert vitamin K1 into vitamin K2, which activates osteocalcin, the major non-collagen protein in bone. Osteocalcin anchors calcium molecules inside of the bone. All of these vitamin K-related mechanisms point to the importance of vitamin K-rich foods for bone health, and it is difficult to find vegetables that are richer in vitamin K than spinach. (On our World’s Healthiest Foods list, only kale provides more micrograms of vitamin K per cup.) Spinach is also an excellent source of other bone-supportive nutrients including calcium and magnesium.

So while spinach probably won’t make you super strong the minute you eat it, as it did for Popeye, it will promote your health and vitality in many other ways. It seems like Popeye was pretty smart after all. Calorie for calorie, leafy green vegetables like spinach with its delicate texture and jade green color provide more nutrients than any other food. Although spinach is available throughout the year, its season runs from March through May and from September through October when it is the freshest, has the best flavor, and is most readily available. It belongs to the same family (Amaranthaceae-Chenopodiaceae) as Swiss chard and beets and has the scientific name, Spinacia oleracea. It shares a similar taste profile with these two other vegetables, having the bitterness of beet greens and the slightly salty flavor of Swiss chard.

Popeye popularized spinach, but it’s too bad he ate it out of a can. Fresh spinach retains the delicacy of texture and green color that is lost when it’s processed. Raw spinach has a mild, slightly sweet taste that can be refreshing in salads, while its flavor becomes more acidic and robust when it is cooked.

There are three different types of spinach generally available. Savoy has crisp, creased curly leaves that have a springy texture. Smooth-leaf has flat, unwrinkled, spade-shaped leaves, while semi-savoy is similar in texture to savoy but is not as crinkled in appearance. Baby spinach is great for use in salads owing to its taste and delicate texture.

Spinach is thought to have originated in ancient Persia (Iran). It made its way to China in the 7th century when the king of Nepal sent it as a gift to this country. Spinach has a much more recent history in Europe than many other vegetables. It was only brought to that continent in the 11th century, when the Moors introduced it into Spain. In fact, for a while, spinach was known as “the Spanish vegetable” in England.

Spinach was the favorite vegetable of Catherine de Medici, a historical figure in the 16th century. When she left her home of Florence, Italy, to marry the king of France, she brought along her own cooks, who could prepare spinach the ways that she especially liked. Since this time, dishes prepared on a bed of spinach are referred to as “a la Florentine.”

It grows well in temperate climates. Today, the United States and the Netherlands are among the largest commercial producers of spinach.

How to Select and Store

Choose spinach that has vibrant deep green leaves and stems with no signs of yellowing. The leaves should look fresh and tender, and not be wilted or bruised. Avoid those that have a slimy coating as this is an indication of decay.

Do not wash it before storing as the exposure to water encourages spoilage. Place it in a plastic storage bag and wrap the bag tightly around the spinach, squeezing out as much of the air as possible. Place in refrigerator where it will keep fresh for up to 5 days.

Avoid storing cooked spinach as it will not keep very well. Tips for Preparing and Cooking

Spinach should be washed very well since the leaves and stems tend to collect sand and soil. Before washing, trim off the roots and separate the leaves. Place it in a large bowl of tepid water and swish the leaves around with your hands as this will allow any dirt to become dislodged. Remove the leaves from the water, empty the bowl, refill with clean water and repeat this process until no dirt remains in the water (usually two to three times will do the trick). Do not leave it soaking in the water as water-soluble nutrients will leach into the water.

Spinach sold in bags has been pre-washed and only needs to be rinsed. If you are going to use it in a salad, dry it using a salad spinner or by shaking it in a colander.

The Healthiest Way of Cooking Spinach

Spinach is only one of three vegetables we recommend boiling to free up acids and allow them to leach into the boiling water; this brings out a sweeter taste from the spinach. Discard the boiling water after cooking; do not drink it or use it for stock because of its acid content.

Use a large pot (3 quart) with lots of water and bring to a rapid boil. Add spinach to the boiling water and boil for 1 minute. Begin timing as soon as you place the spinach in the pot if you are using 1 pound or less of spinach. If you are cooking larger quantities, bring the water back to a boil before beginning timing the 1 minute. Do not cover the pot when cooking spinach. Leaving the pot uncovered helps to release more of the acids with the rising steam. Research has shown that the boiling of spinach in large amounts of water helps decrease the oxalic acid content. 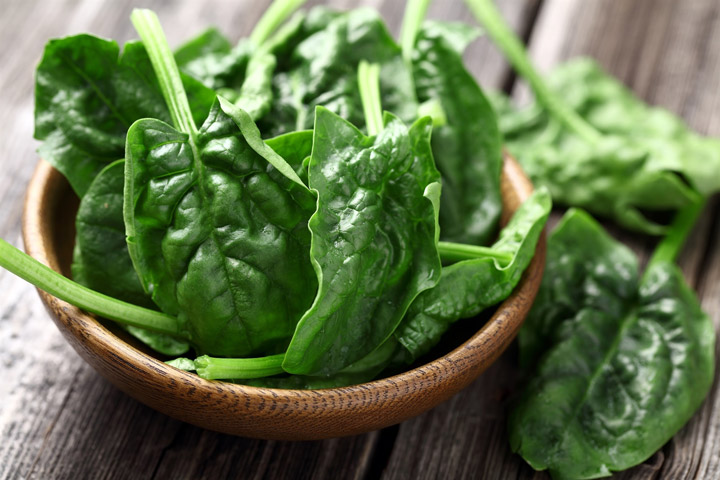 Remove it from pot, press out liquid with a fork, place in a bowl, toss with our Mediterranean Dressing, and top with your favorite optional ingredients.

Please follow us on Pinterest and enjoy our collection of recipes, crafts, fitness, health tips, gardening, DIY and more…